There is a funny old law on the books in France that says it's illegal to sell a little bird called the ORTOLAN, (a Bunting/Finchy type oiseau) however it is not illegal to eat them.  The french consume this delight whilst hidden under a napkin, supposedly this increases the perfume, personally I believe it is to hide the guilt and shame of the diners civil disobedience. Soon I fear legislation will come to limit yet another delicacy,  wild Tuna. In fact I'm starting to feel twinges of guilt everytime I think of TORO, something that I have eaten on a regular basis for the last 25 years.

Zuma Restaurant in London is a Toro meister,  Here is some O-toro sashimi I ate last time there. I am somewhat obsessed with this natural wonder. 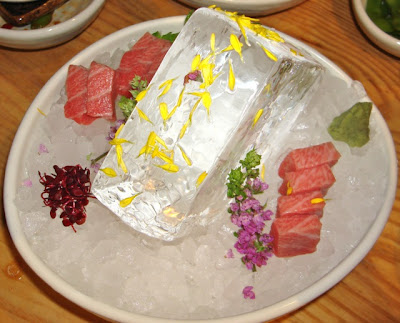 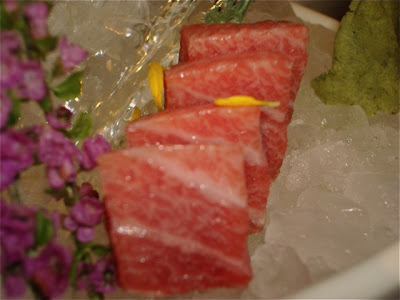 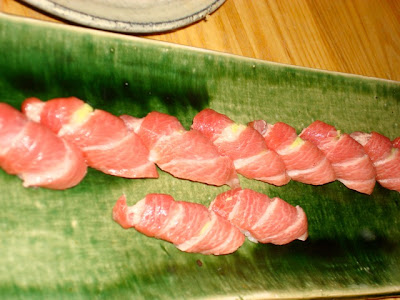 Above the Zuma Toro Sushi. 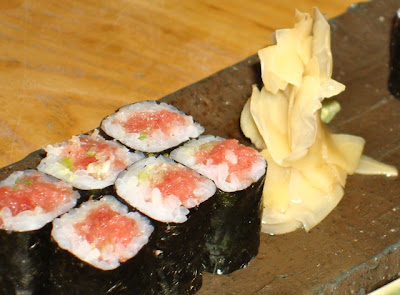 Ok enough  with the Toro. So let's talk about Zuma. Zuma is to Nobu what Belgium is to France, it OVERJAPS! It is beyond the borders of Japan... it is does not play by the rules that would limit  a Nobu, but that is a good thing. Zuma is in my London top 10, which includes Amaya, but that is for another posting. Zuma is full of whimsy, the gastronomic equivalent of Tim Burtons Alice In Wonderland!

Look at this Chili Squid with Jalapeno's - if you see what I mean. Nippon meets Mexican Mariache! The squid is greaseless crisp, hot and twangy good but this chili pepper has never been to the land of the rising sun....ever!. 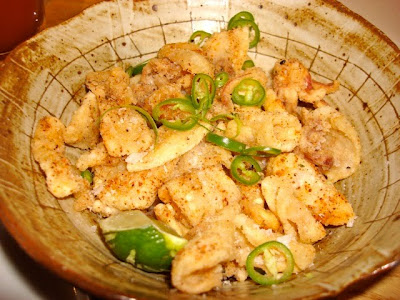 Zuma is not frightened to nick the best culinary tricks from any cuisine look, at this Tomato and Aubergine salad. 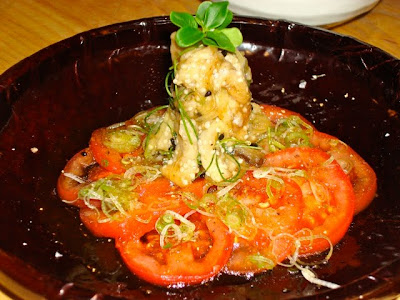 It would not be out of place in any modern Italian or Greek eatery, the only scintilla  of Japan is the shredded shiso and scosh of yuzu in the dressing.. Same for the Wagyu/Kobe carpaccio, not exactly screaming Tokyo either. 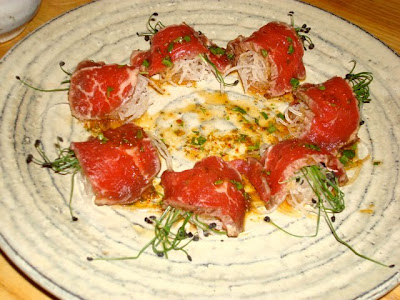 Let's be clear, the lack of any cultural provenance or the adherence to a particular national cuisine liberates Zuma from the limitations inherent in a "true- trad" Japanese restaurant, this is not a handicap but rather a release from the "binds that tie" which are well deployed as you have seen. When you consider the sea bass  "new" Sashimi I soar with elated approval. 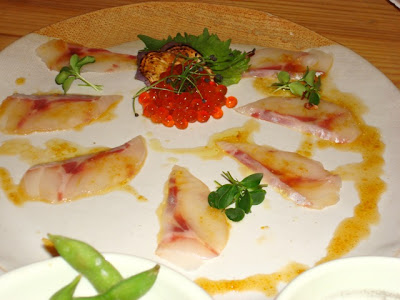 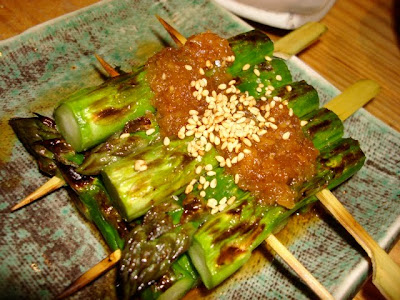 I love the lobster tempura served without even the hint of greasiness; these guys know how to run a deep fat-fryer. 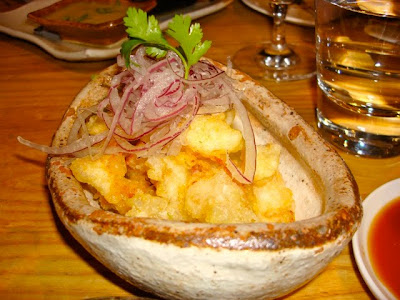 Black MISO cod (A NOBU) signature dish was and is a failure I have tried it on several occassion and it pales in comparison to the real deal, the dilemma is that for whatever reason the fish is too fishy and the sauce too sweet, maybe it's the miso (too much white) used or the marinading process itself. It cloys!  It's culinary karaoke! 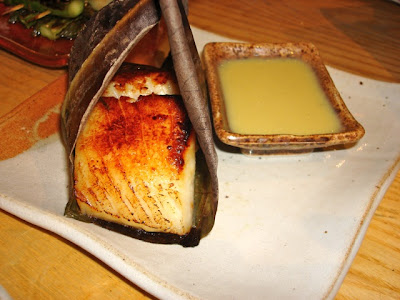 I'm happy when they put heat to TORO too, ok why would you want to do that to perfectly A1 fatty tuna, better served raw I hear you exclaim... well look at this then! 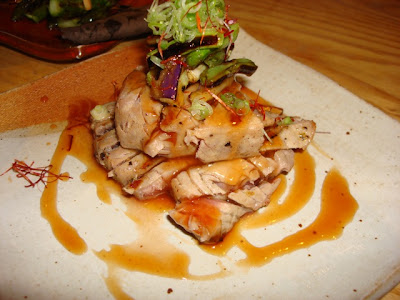 Japanese skill with a touch of whimsy lifts this Tuna to great heights. Not so the grilled Wagyu! 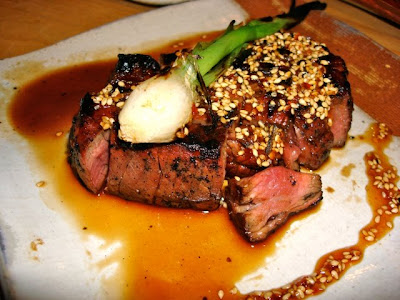 Between you and me this was the least interesting thing I ate, was it good meat, Yup, was it correctly cooked Medium rare, yup again but the terryaki sauce did little but sweeten this great meat, a steak that needed a salted zinger, sadly sesame ain't something that piques my palate a menu mistep.

Lastly let's talk about something that is not on the menu:

the SECRET VOLCANO OF CHOCOLATE dessert.

This is in my top ten list of desserts in the world, yes, ever anywhere. The secret is the most subtle but real presence of a caramel aftertaste that arrives late in the mouth and lingers on the palate for more than a minute, the problem always is that it is the last bite that hits you this way because it's simply is impossible to wait a minute between bites. I have no photo of it either because it arrived and my guests hit it; better to say, gobbled it all up before I could shoot it for this blog! I'm just glad I got one forkful and a smear on the back of my spoon!

www.zumarestaurant.com
Posted by Monte Carlo Monaco at 12:53 AM