Ralph's clothes are better than his food! (PARIS)

Ralph's is all the rage, hard to get into (beg Chloe or Simone the aloof telephone gatekeepers) and better still read my review and avoid altogether.
I never go to a restaurant that has just opened as I want the joint to find its feet and get into the rhythm, firing on all cylinders which usually takes a couple of months of running in. I also feel it is inaccurate  to review during the pre-opening - open house, as this never truly represents what a punter experience will be like on an anonymous wednesday evening in November.
My only positive, the room and courtyard at 173 Bvd St Germain is a gorgeous, sumptuous, clubby, a wood panelled beauty. It is like you are arriving into a wonderful country house with all the luxury trimmings, with attentive and smiling staff.
Then after they pluck down the bread basket it is all down hill.....  the food is a shocker! All the more so as the chef plucked from Frechon's - Bristol kitchen and was trained in NY blah, blah... 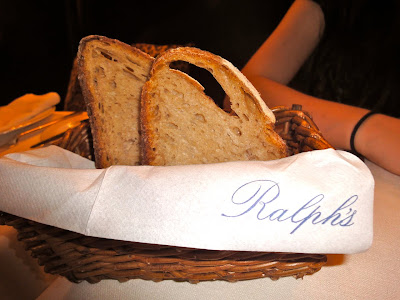 The crab cakes were oily, the inside not warmed just beyond tepid 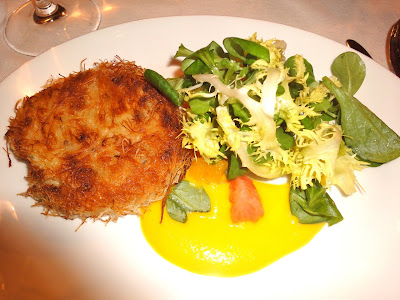 Drama followed in another failure the bacon dominated grease bucket sold as clam chowder, a sorry soup on the account that the bacon had not been properly rendered (see close-up below) and had become gelatinous porcine chewing gum, the broth was too thin. Anyone hear of beurre manie or a simple roux? 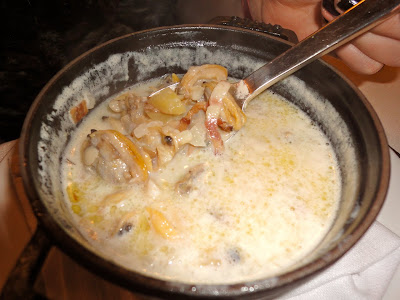 Hoping for things to look up from this point on, my daughter ordered grilled chicken and guess what, they served the Fried chicken, an ordering gaffaw, she decided to keep it but.... when she cut in to it, it was raw, raw at the bone as blood seeped onto the white plate, not nice at all. 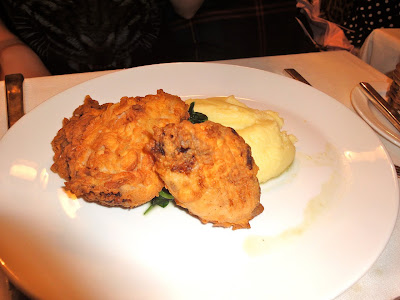 Chicken Act II was a huge improvement over bird Act I  but this chick was over-cooked! 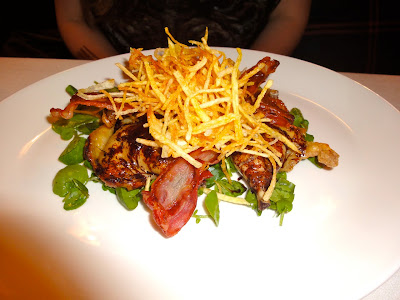 Hoping for redemption via a cheese burger, you can probably tell from looking at the picture what the problem is, the burger had sat waiting for service and so its cheese had coagulated into a cold burger cocoon, the meat was dry and over ground, the floury and pasty grey the burger fell apart; the crime - the meat was too lean. Even Ralph's Manahattan consultant, Danny Meyer knows you need a minimum of 20-25% fat and a corse grind to make a juicy NY burger. No need to send the chefs to the big apple when you can send them to the Shwartz's Deli in Marais for a little lesson. 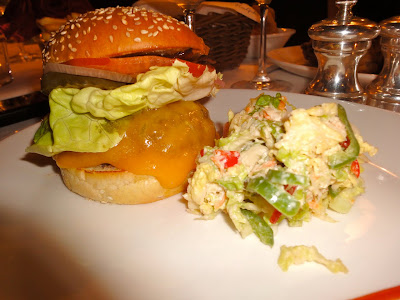 Dessert felt like that little leaf of mint below all show and no substance, the fruit was greenly unripe and made me pucker, as if I had downed a shot of bitters. 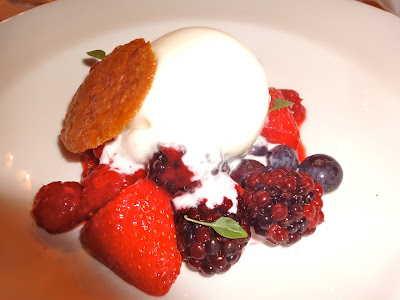 The cheesecake, advertised as New Yorky was not even fit to be served in New Jersey, what a joke, over sweet, not dense, not NEW YORK at all! 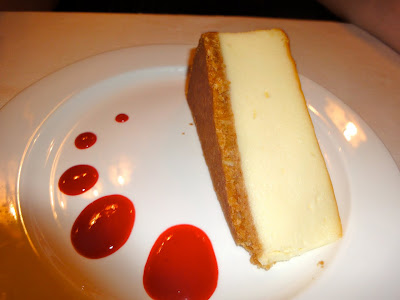 By all means buy clothes but bypass Ralph's!